Waves of cultists stormed over piles of corpses, viciously throwing themselves into the carnage.

His Combi-flamer had run dry during the initial charge.

His Plasma pistol, also empty, glowed hot and was discarded into the screaming maw of another cultist.

His Chainsword finally gave out and spat its chain against his arm before falling slack and tearing loose.

He was alone now, fallen soldiers joining the ranks of the dead.

His only weapons were his Tempestor dagger, shattered in the carapace armor of a maddened enforcer, and the cleaning rod for his pistol.

He was out numbered, but the advantage was still his. For he had the God Emperor’s will on his side, and enough cybernetics to render their pitiful attacks moot.

All Kreave had to do was outfight a hundred untrained cultists.

I was pretty happy with this, but now I just can’t work on it. Left out a bunch of details. 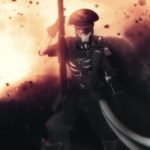