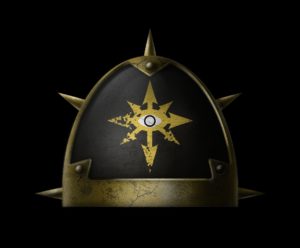 The Black Legion is a Traitor Legion of Chaos Space Marines that is the first in infamy, if not in treachery, whose name resounds as a curse throughout the scattered and war-torn realms of Humanity. The Black Legion was once one of the 9 First Founding Legions of Space Marines who turned Traitor to the Imperium during the Horus Heresy in the early 31st Millennium. The Black Legion, at that time still known as the Sons of Horus, became the primary instrument of its primarch, the Warmaster Horus, to overthrow the Emperor of Mankind and seize control of the Imperium in the name of Chaos.

In the Tombs Done for Warhammer 40K. © Fantasy Flight Games

This is a progress in the last year my first battle size of warhammer 40k. All right reserved Games workshop

The Chosen of Abaddon

Another work done for Behaviour's Eternal Crusade MMO, this time with a family shot of the best bad buddies.

Chaos Rhino Another work done for Behaviour's Eternal Crusade MMO, this time with a family shot of the best bad buddies.

Artwork for the "Armageddon: Pandorax" expansion codex. The last traditional artwork and the largest piece of art I have ever attempted on...

Another work for Behaviour's Eternal Crusade. This is not the finished version they finally used, but just as far as I could take the image, so...