Sobak was a young sergeant when calamity fell upon his chapter. During the Tragedy of Tirnanag, the entire upper echelons of the Ash Drakes chapter were slain alongside half of the chapter’s battle brothers. The Ash Drakes were forced to adopt more feral tactics in order to survive and Sobak alone held his chapter together. After the century long war for Tirnanag, the Ash Drakes gave this young sergeant the new title of Hunt Master and made Tirnanag their home world. Sobak and his Ash Drakes spearhead the forces of Asharin Crusade in their fight against the Imperium of Man. 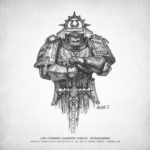